Alexandra Keller from the LB Cluster Oncology and the Clinical Department of Hematology and Hemostaseology of the MedUni Vienna in the AKH Vienna was awarded the Misdorp Award at the European Society of Veterinary Oncology (ESVONC) congress in Cracow.

The Wim Misdorp Award recognizes the best contribution to the knowledge of pathogenesis, diagnosis, therapy, prevention or control of animal tumour diseases. It is awarded annually at the ESVONC General Assembly to one scientist. The prize includes an invitation to the annual convention of the Veterinary Cancer Society in the USA where the work is presented again.

Mastocytomas (mast cell tumours) in dogs are characterized by uncontrolled growth of neoplastic mast cells. While there are effective therapies, the number of relapses is high. The work of Alexandra Keller („The JAK2-STAT5 pathway as a novel therapeutic target in canine mastocytoma“) investigated potential new drugs for the treatment of mastocytomas.

Alexandra Keller, native of Vienna, studied food and biotechnology at the University of Natural Resources and Life Sciences, Vienna. Mrs. Keller wrote her Master thesis at the Austrian Institute of Technology (AIT) in Vienna. She is currently working as a PhD student in the Peter Valent laboratory in the Clinical Department of Hematology and Hemostaseology (University Clinic for Internal Medicine I) at the MedUni Vienna. 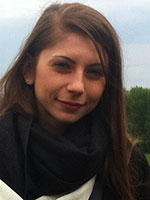